I wasn’t surprised to find the usual ice cream franchise brands in Noosa – Copenhagen, New Zealand Natural and Gelatissimo. But, I was pleasantly surprised to find boutique gelato makers – doing their own thing and making gelato especially for those with a refined ice cream or gelato palettes. Gelato that rivals Sydney’s now famous Gelato Messina.

Knowing this gave me the perfect excuse to extend my nightly Noosa feasts. So, I satisfied my sweet tooth with some fine gelato specimens. Here’s my verdict on Noosa’s Nitrogenie and Amo Gelato. 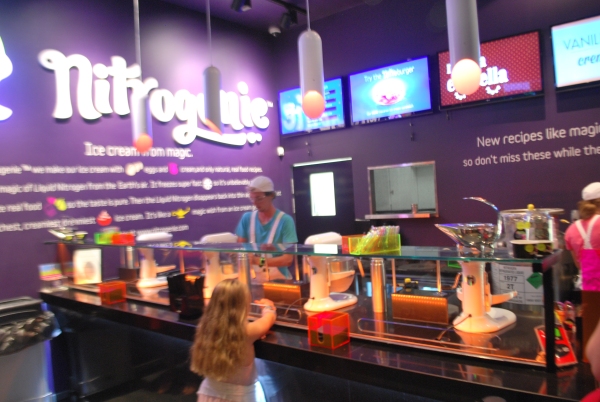 A good friend told me about Nitrogenie so it was on my to do list before arriving in Noosa. It’s located in the middle of Hastings Street and, with a queue waiting in line, it’s hard to miss. Although a franchise model there are only two Nitrogenie locations – both in Queensland (South Bank in Brisbane and Noosa Heads).

Nitrogenie isn’t your usual gelato parlour – rather it’s deliberately designed to feel like a kind of Willy Wonka gelato laboratory. The ice cream is made using liquid nitrogen. You place your order choosing from a cone, cup, ‘Nitroburger’ or ‘Nitroshake’ and then the magic happens. A few puffs of smoke or liquid nitrogen later and your gelato is passed over the counter. There’s a summary of exactly how it’s made on Nitrogenie’s website.

Nitrogenie’s gelato fits with my Feast Wisely philosophy. Here’s an extract from their website that explains why: ‘Using only real food ingredients, like actual creamy milk and actual eggs. And actual real food that we add to create actual incredible flavours. The flavours you see here taste exactly like the real thing because they are the real thing. No artificial anything.’ 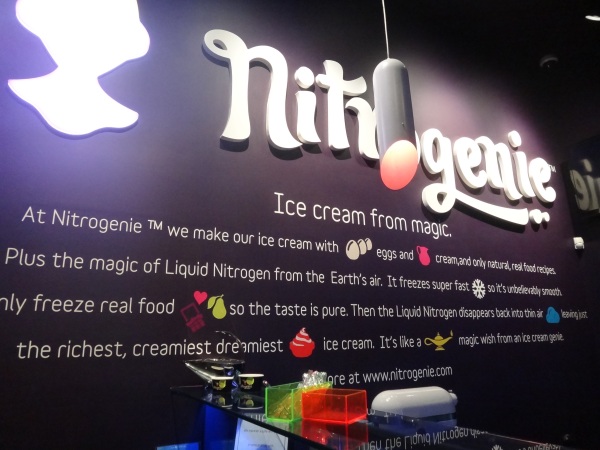 I choose the vanilla beanie to get a real feel for the milk and egg base without too many extras added. It’s smoothier and creamier than any other gelato I’ve had in Australia. There’s not much more too it – a gelato fix that uses real ingredients to produce a result that you simply won’t want to share a single spoonful of – so either visit alone or ensure your companion orders their own serving!

Know before you go:

I came across Amo Gelato by chance. During a day of cycling around Noosa we stopped for a coffee on the river in Noosaville. The pit stop was deliberate – this was no river water coffee. ‘Modern Espresso’ is locally roasted in Noosa. I got chatting with the barista about how good it was to see him using local Jersey milk and the conversation quickly turned to gelato – I discovered that the business extended to hand crafted gelato. On hearing that this gelato was served until 10pm just a short walk away we committed to end the night’s feast at Amo Gelato.

It was a good move – Amo Gelato uses fresh local ingredients (milk and cream) with no added preservatives. They have a huge variety of flavours of both gelato and sorbet to choose from. You can choose one, two or three scoops and mix and match any flavours. Best of all you don’t have to walk far to find a quiet spot to enjoy your gelato – because the cafe has tables and a bar overlooking the street.

We weren’t the only ones after a night time gelato fix. It felt like a nightly ritual for a short line of locals and tourists who were waiting to be served. Amo Gelato’s prices are reasonable (especially compared to Nitrogenie) with a medium sized cup or cone at $5.50.

The gelato is fantastic – creamy and smooth and very moorish. I chose the plain vanilla and the macadamia flavours – partly to avoid too much added sugar and also to get a real taste for the milk and cream giving me a good comparison point with Nitrogenie. I was actually relieved we weren’t staying in Noosaville or I’d have been back – and probably would have been tempted by the half litre of gelato to go at $12!

But that’s enough from me – check out the realms of reviews on Trip Advisor – Amo Gelato ranks above even Noosa’s fine dining restaurants. Now that’s a sign of good gelato.

Need a third option? I didn’t try it but Massimo’s Gelateria at 75 Hastings Street looked popular.