I recently picked up a lovely bag of new season Pink Lady apples at my local farmer’s market. A couple of weeks and lots of fennel and apple slaw later, I still had half of them sat in the fridge begging to be used. Then, with perfect timing, I came across a lovely recipe from my fellow food blogger Amy at Thoroughly Nourished Life. Amy, like me, tries to nourish herself daily with wonderful whole foods but doesn’t deprive herself of a sprinkling of sweet things now and again. It was Amy’s recipe for Ginger and Apple muffins that inspired me to put my Pink Lady apples to good use. 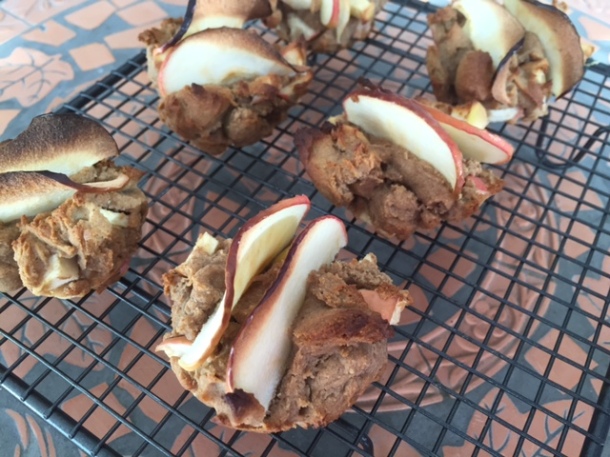 Here I’m sharing my adapted version of Amy’s recipe – I omitted the brown sugar, changed up the type of flour, upped the cinnamon and used fresh ginger instead of dried ginger. I also made a smaller batch than Amy (6 instead of 12) for fear of either first attempt failure or all 12 perfectly formed muffins being devoured way too quickly.

Of course be sure to check out Amy’s gluten-free recipe too. 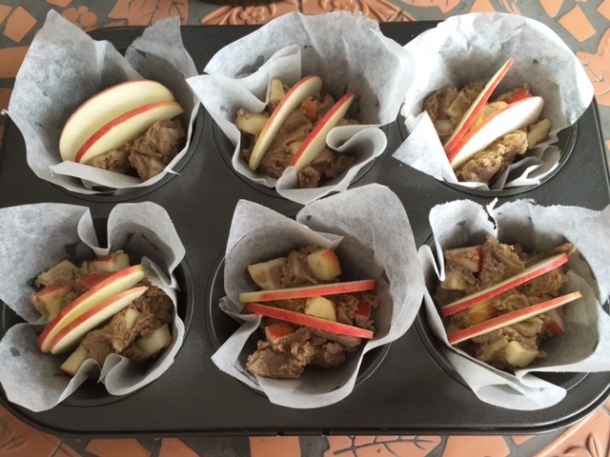 Before they hit the oven (above) and after cooling (below)

Although Amy advised that’s its best to eat these on the day they’re made (or otherwise freeze them) I found them to be just as moist and tasty the second day.

Oh and be sure to follow Amy at Thoroughly Nourished Life if you’re also a ‘wholefoods always/sweet things sometimes’ kind of foodie!

What happens when I design my own salad....rocket, cos lettuce, cannelloni beans, red onion, snow peas, avocado, olives, almonds, capers and radish - topped with Gorgonzola and Parmesan! 🥗 Salad heaven @fratellifresh when you can pick your own ingredients for $15 👍🏽 . #salad #greenfood #plantbased #veggies #fratellifresh #sydneyfood #avocado #vegetarianfood #saladheaven
When you find a working Panasonic Discman at the bottom of a box of 20 year old CDs - memories of a slower time! 💿
Happy end of decade Christmas 🎄☃️
Suddenly you’re two years older almost at the big 40, your hair has changed colour from blond to brown and you are moving house again from one side of Sydney to the other....life is too short to stop still so I’m telling myself to embrace change 💕 😍
So here’s the result of an hour of truffle hunting with Peri the truffle dog - the box was full and check out the truffle worth a few hundred 💰 in Romin’s hand.... . Any dog with a super strong sense of smell and ideally a long nose can be trained to truffle hunt - Peri was rewarded with a cube of 🧀 every time he found a truffle! . Plant some truffle treated oak trees in perfect soil somewhere with the right climate and in a few years you may have truffles🌳 . #truffles #truffleseason #tourismnsw #australia #truffledog #trufflehunting #dogsofinstagram
July= truffles= Robertson . Visit @trufflesrobertson to take your truffle appreciation to a whole new level - thanks Sam and the team! I could never have imagined that one little pup could have found so many truffles! Truffle hunting only happens for a short season - so get in quick if you want to try it. ❄️ 🐕 . #southernhighlands #southernhighlandsnsw #bowral #visitnsw #truffleseason #robertsontruffles
Sunday pizza feast @devitamanly thanks to the queen and her birthday long weekend 😍 . . #pizza #sydneypizza #manlybeach #devitamanly #manlyfood #italianfood #holidayweekend
Got to be the most authentic pizza in Taiwan - after plenty of Taiwanese delights we couldn’t resist tracking down the delicious @gustopizzatw for a little bit of Italy in Taipei 🍕here’s the vegan friendly marinara 😋 . . #pizza #veganpizza #gustopizzatw #taiwanfood #taipeifood #marinarapizza #pizzalover #pizzaintaipei #vegetarianpizza
%d bloggers like this: