“The main meal of the day, taken around midday or in the evening. A formal meal, typically in honour of a person or event.”

These intrigue building words greet guests as they enter the long dark corridor that separates the Crown Towers hotel from Dinner by Heston Blumenthal. October 2015 saw the opening of Dinner in Melbourne – Heston’s first permanent restaurant outside of the UK.

The Dinner by Heston magic started in London in 2011 – where one Michelin star was soon followed by 5th place on The World’s 50 Best Restaurants list. Why “Dinner”? I’ve read that Heston wanted a name that was inspired by historic British gastronomy but that was also playful. Until the 1800s in Britain the main meal was called dinner and it was eaten at midday. Over time the main meal shifted to around 5pm – but, in some parts of the UK (like Yorkshire where I grew up), ‘dinner’ is still used today to describe what most of us know as lunch. And at Dinner by Heston dinner is served as late as 10pm……Confused? 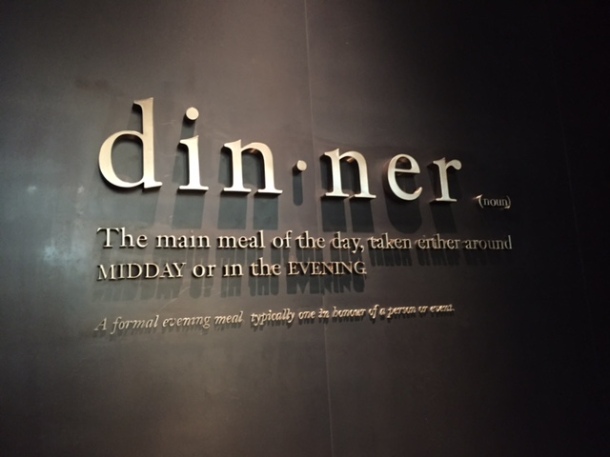 Anyway whatever time of day guests are feasting on their main meal at Dinner by Heston they probably feel lucky to be there. Apparently Heston had 15 offers from around the world – and it was his love for all things Australian that lead him to Melbourne. What’s more the first few months of reservations disappeared in a flash – to those (like me) who’d missed out in The Fat Duck ballot (the Heston pop-up that came before Dinner).

The kitchen at Dinner is headed up by Ashley Palmer-Watts who, alongside what seems like a small army of chefs, presents his re-interpretation of British recipes dating back over 500 years. As a guest you’re left in no doubt as to the historic inspiration for each dish – the menu itself lists the sources of origin. Like the Hay Smoked Ocean Trout – from The Complete Practical Cook by Charles Carter (1730). And the Brown Bread Ice Cream – from A New System of Domestic Cookery by Maria Elizabeth Rundell (1830).

Then you have an almost overwhelming choice of 8 “starters” – the very British term for entrees. Not knowing if I’d ever be back I didn’t deliberate – the meat fruit, one of Dinner’s signature dishes, an obvious choice. It’s a ball of chicken liver parfait disguised in a skin of citrus mandarin gel – the result over over 2 days of preparation. The dish is topped with a (non-edible) leaf and is served with more of that delicious locally made and grilled bread.

Of course I, like many who’ve been before me, couldn’t resist taking photos from all angles. Probably 20 shots later I sliced through the shiny orange skin to reveal the best parfait I’ve ever tasted. 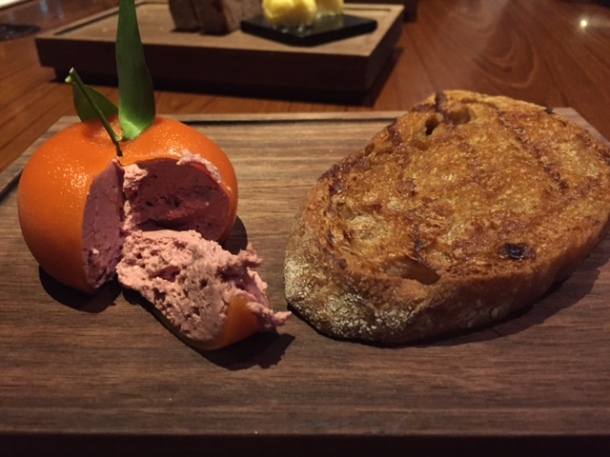 The team at Dinner aren’t trying to replicate historic dishes in the way food historians would – they’re re-inventing them for the 21st Century, using lots of Australian produce along the way. For example the Braised Celery from c.1730, my choice of main course. The name itself is underplays what’s really a complex, flavour packed dish – three celery sticks come decorated with parmesan, roast artichokes, cider apple & smoked walnuts. 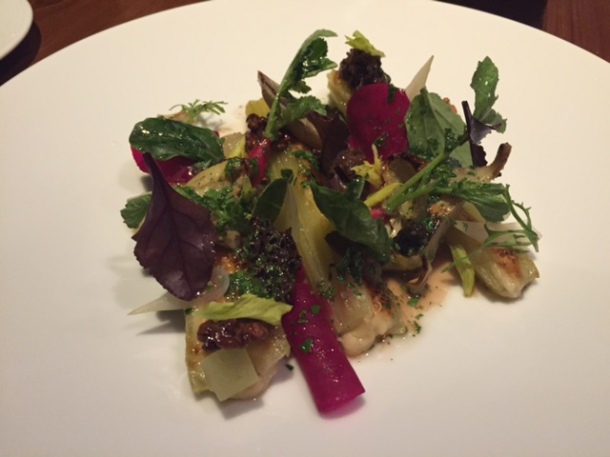 My husband, usually a red meat man, choose the chicken cooked with lettuces for main course. It comes with grilled onion emulsion, oyster leaves & spiced celeriac sauce. The most tender chicken either of us have ever tasted? Of course that’s what we agreed as I leaned over for another cheeky taste.

Based on my experience I’m sure that by the time most guests sit at their table they’ll have noticed the pineapple spit roast. It sits behind the big glass windows of the kitchen and is one of the features of the London restaurant that’s been replicated in Melbourne. It’s also one of the key reasons I can’t imagine many guests leaving Dinner by Heston without being tempted by dessert. Why? The Tipsy Cake of course…..

The dessert that seems to appear at least once on every table is the Tipsy Cake. A slice of spit roasted pineapple comes as a side to a brioche based pudding of brandy, cream and sugar. Despite taking its inspiration from a pudding that dates back over 200 years I’d happily choose a Tipsy Cake over most 21st Century desserts.

A second dessert was deemed a wise decision so we could “share”. Although that proved harder in practice.

Wanting something Australian inspired we choose the Lamington cake. It’s relatively modern alongside the rest of the menu, apparently dating back to c.1900. Despite a little bit of research suggesting to me that it was possibly named after a Lord or Lady Lamington from Queensland Heston’s team report that they’re “yet to get to the bottom of this one”……

Whatever its history this 2015 take on Lamington Cake completely outshines what Australians typically consider to be a good lamington. The Lamington at Dinner by Heston (with a surprise chocolate centre) comes with grilled raspberries, toasted coconut & cocoa ice cream. 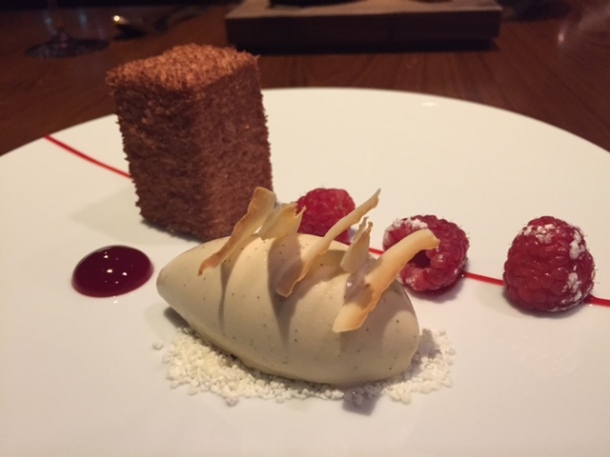 As if the sugar in the Tipsy Cake and Lamington hadn’t left me tipsy enough they were followed by a complimentary rich chocolate end to a very special meal.

In a city that’s jam-packed with world-class restaurants what makes Dinner by Heston so special? In my opinion it’s truly different – every dish is so unique you can’t imagine coming across anything like it elsewhere. It’s fun – how many restaurants disguise chicken liver as fruit and end your meal with the offer of ice cream churned at your table with liquid nitrogen? (regrettably I was so full I really couldn’t squeeze it in). Finally it’s memorable – too often even the best, most refined and expensive meals can quickly become very distant memories – not so with Dinner by Heston. It’s a dining memory you’ll have no trouble releasing from the archives – yes you’ll talk about the Meat Fruit and Tipsy Cake for a long time to come.

So what else do you need to know?

Suddenly all treats are classified as essential - these were a great 2019 middle aisle find (Aldi) 💕 . #quarantinesnacks #isolationtreats #cookies #aldimiddleaisle
Kicking off Mardi Gras in style thanks to @f45trainingtownhall . #mardigras #love #f45training #sydneymardigras #f45
15 years with this handsome guy (as mum has always called Romin) 💕💕💕🥰🥰
What happens when I design my own salad....rocket, cos lettuce, cannelloni beans, red onion, snow peas, avocado, olives, almonds, capers and radish - topped with Gorgonzola and Parmesan! 🥗 Salad heaven @fratellifresh when you can pick your own ingredients for $15 👍🏽 . #salad #greenfood #plantbased #veggies #fratellifresh #sydneyfood #avocado #vegetarianfood #saladheaven
When you find a working Panasonic Discman at the bottom of a box of 20 year old CDs - memories of a slower time! 💿
Happy end of decade Christmas 🎄☃️
Suddenly you’re two years older almost at the big 40, your hair has changed colour from blond to brown and you are moving house again from one side of Sydney to the other....life is too short to stop still so I’m telling myself to embrace change 💕 😍
So here’s the result of an hour of truffle hunting with Peri the truffle dog - the box was full and check out the truffle worth a few hundred 💰 in Romin’s hand.... . Any dog with a super strong sense of smell and ideally a long nose can be trained to truffle hunt - Peri was rewarded with a cube of 🧀 every time he found a truffle! . Plant some truffle treated oak trees in perfect soil somewhere with the right climate and in a few years you may have truffles🌳 . #truffles #truffleseason #tourismnsw #australia #truffledog #trufflehunting #dogsofinstagram
%d bloggers like this: