A quick glance in my Natural Wonderfoods book revealed to me just how nutritious mushrooms are. As well as being prized for containing high doses of B vitamins, potassium and Vitamin E they also contain selenium. Selenium is a mineral that, with the exception of mushrooms and spinach, isn’t commonly found in fruits and vegetables. Selenium helps to prevent oxidative damage – it’s an anti-oxidant known for its anti-aging properties. Perhaps even more interestingly I’ve read that mushrooms are the only vegan source of vitamin D. Some rate them as second only to natural sunlight in providing us with this much needed vitamin. So next time you’ve spent too much time indoors perhaps consider adding mushrooms to the menu. 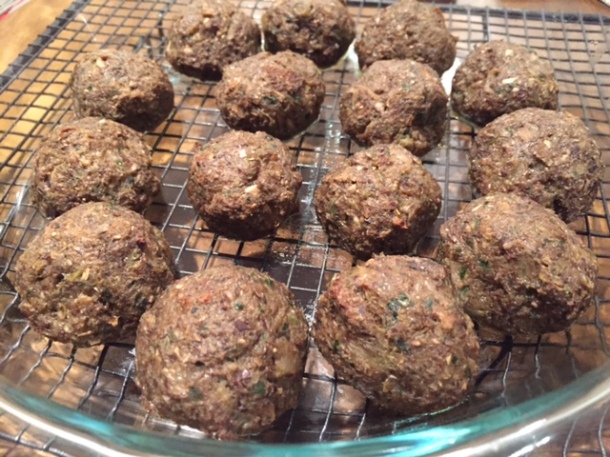 On first draft the name of this post was mushroom balls. But, after being very pleasantly surprised by them, my husband pointed out that this would be misleading. Because not only do they resemble meatballs in look and shape, but their texture (and taste) is just as good as their meat based equivalents. So I renamed them mushroom meatballs. To be clear though there’s no meat involved – it’s all about the mushrooms.

Chances are, like me, your mushroom use up until to now has been fairly conventional. I’ve stuffed mushrooms, BBQ’ed them in parcels with butter and added them to stew bases. But that’s about all. This recipe however brings a totally different technique – here the mushrooms are finely chopped in a food processor to turn them into a mince like consistency. You can see here how the ‘mince’ mixture looks before it’s rolled into balls. Anyway I’m really excited about this recipe – and I’m sharing it as part of Fiesta Friday #129. 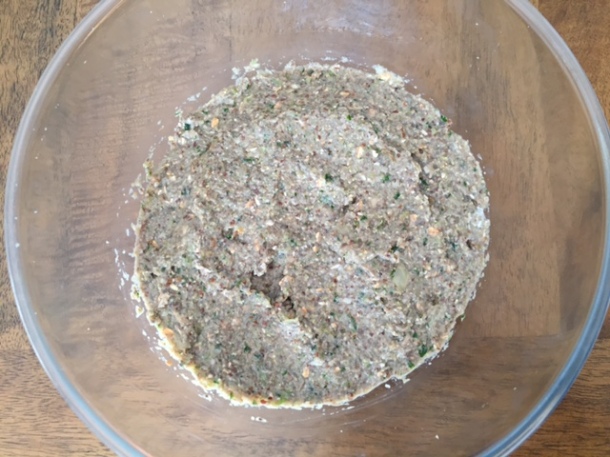 I found this recipe online at allrecipes.com where it’s accompanied by over 150 glowing reviews, many of which mention how the texture of these balls really does resemble that from using meat. I pretty much followed the instructions to the letter – for fear that my usual experimentation could impact the end texture.  You can check out the full recipe here.

My top tips? Firstly make a generous portion. Mushrooms contain up to 90% water and because they’re very low in calories this means you can almost go for your life when it comes to portion size. Secondly – be sure to ‘rest’ the mince mixture in the fridge before rolling the balls. This step is really important for the end texture. I did this for 3-4 hours but leaving it overnight could be even better.

I served my mushroom balls with a simple tomato based sauce and threw in some crushed garlic and a few chopped olives. But you could easily modify the shape of the balls into flatter patties and serve them as vegetarian burgers. You could also make these balls vegan by replacing the butter with coconut oil, using a chia seeds egg substitute and omitting the cheese.