Could eating chillies add years to your lifespan? Yes, if the latest research is anything to go, it seems chillies can play a role in helping us to live longer. An observational study at the University of Vermont has linked eating hot red chillies with a 13% reduction in total mortality. Put simply researchers studying almost 17,000 Americans over 6 years found a significant reduction in deaths among those with a fondness for spicy chillies.

Being a huge chilli fan myself this news excited me when it made the headlines in January. For me chillies are such a daily dietary staple that dried chilli flakes have pride of place on my kitchen bench, alongside the salt and pepper. The active component of chillies that makes them hot is called capsaicin and the ‘Scoville scale’ is used to rate the pungency of different chillies. The higher the capsaicin concentration the higher a chilli scores in ‘Scoville heat units’.

Luckily for me one of my work colleagues, Ben, lives by a store that stocks Mexican and Latin American produce. After discovering my fondness for heat he kindly grabbed me a whole variety of Mexican dried chillies. It wasn’t long before I’d used some of my new supply to whip up a huge batch of spicy Mexican sauce. That recipe will come soon – but in the meantime, post a little research on Wikipedia, here’s a little more about each of these chillies.

Pasilla – The pasilla chile, also known as chile negro, is mild to medium hot and pairs well with garlic, oregano and fennel. Looks wise its distinguishing feature is a dark wrinkled skin – the name pasilla actually comes from ‘little raisin’. The pasilla also has a long length of 15cm to 20cm. Pasilla chillies are deep in flavour and are commonly used in Mexican sauces. More interesting I’ve even seen them appear in a recipe for Mexican chilli chocolate ice cream. Take note if you go on the hunt for pasilla chillies – they’re pronounced ‘pay-see-yah’. 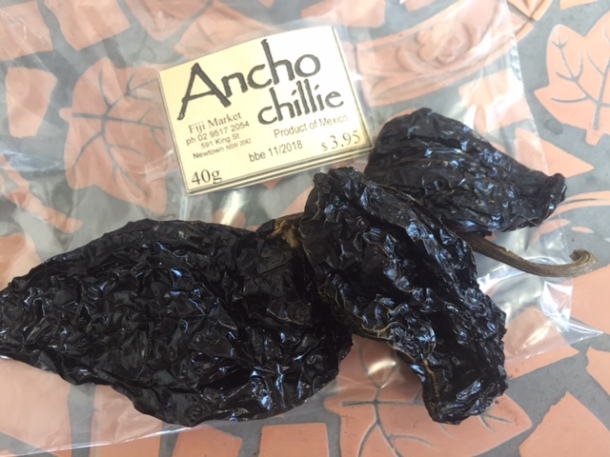 Ancho – Ancho chillies are the dried form of the poblano chilli pepper. The name ancho comes from the Spanish word for ‘wide’ – as these dried chillies have a wide and flat shape. Although generally deemed to be mild on the heat scale overall you’ll find dried red poblanos to be hotter than green ones. Their relative mildness means poblanos are often stuffed fresh and then roasted. And after drying the ancho chilli can be ground down to produce a chilli powder that’s said to have a sweet and fruity flavour.

Mulato – Like the ancho chilli the mulato is also a form of dried poblano chilli – one that’s been ripened to dark brown before it is dried. Because of this, like the ancho, it’s also on the lower end of the heat scale. The mulato is strikingly big in size – being as long as 14cm with a typical width of 5cm. The flavour? I’ve seen it described as resembling aniseed, chocolate and licorice. The 3 chillies covered so far, ancho, mulato and pasilla, make up what’s called the ‘holy trinity’ of chillies in Mexico’s national dish, mole poblano. Along with around 15 or so other ingredients the chillies produce a rich, dark stew (or ‘mole’).

Habanero – By far the hottest of the chillies here habaneros rate 100,0000 to 350,000 on the Scoville scale. By contrast the mulato rates 2,500 to 3,000 – giving you a feel for just how spicy habaneros are. In the late 1990s the habanero was the world’s hottest chilli in the Guinness Book of World Records (a title that’s today held by ‘The Carolina Reaper’ – a chilli that rates over 2 million on the Scoville scale). Habaneros ripen in different colours and are small in size. Dried habaneros commonly feature in hot sauces – with name like ‘liquid fire’. They can also be added to spice up salsas or ground into a chilli powder.

Chipolte – Last on the list is the one that I’m most familiar with – the chipolte chilli. The chipolte comes from smoke drying a jalapeño and so the heat level is relatively mild. The chipolte is a fantastic chilli to give a dish a distinctive dark and smokey flavour. Chipolte chillies work really well in slow cooked dishes, like chilli, and mixed with other spices to marinate meat. I’ve also read that they can be used as a vegetarian substitute for bacon. An easy way to get a chipolte hit would be to pick up a jar of hot sauce – like Tabasco’s Chipolte sauce product.

As I said at the start of this post I used one each of these chillies (minus the scary habaneros) to whip up a huge batch of spicy Mexican sauce. That recipe will come soon. In the meantime if you’ve been questioning my spelling during this post note that chilli or chillies to me may be chili or chiles to you. That’s because ‘chilli’ and the plural ‘chillies’ are the spelling used in British English. In American English there is one less ‘l’ – ‘chile’ and ‘chiles’. Either way they could be an easy shortcut to a long happy life so it seems you really can’t have too much chilli. If you have any chilli tips or tricks I’d love to hear them!

15 thoughts on “A guide to dried Mexican chillies”