We just moved house. Well strictly speaking we moved units. I say that because house prices in Sydney have skyrocketed so much in recent years that you now need a cool $1 million (and more) to purchase an ‘average’ Sydney house. It’s a city where opting for a unit/apartment can be the only way to tick ‘location’ off your wish list.

Since arriving in Australia in 2007 we’ve moved units four times and the most recent move was the biggest. Biggest not because of size (our total living space is 100 square metres) but because it was so eagerly awaited. We bought ‘off the plan’ in Manly back in early 2015 and during a long three year wait I kept reminding myself that the best things come to those who wait.

The Sydney suburb of Manly is only around 15km from the CBD but it feels a million miles away from the hustle and bustle of the city. It’s one of those relaxed beach spots – similar to those that feature on Australian TV shows like Home & Away and Bondi Rescue. As a Manly local there’s so much on my doorstep. I can walk barefoot from home just 100 steps or so, coffee in one hand and usually two dogs in the other, to watch the sunrise over the Pacific Ocean. And when it comes to foodie options I’m spoilt for choice…..

One of my unexpected foodie joys is a weekly produce market. Every Sunday farmers bring their freshly picked seasonal delights to the centre of Manly.

One of those farmers, Rita’s Farm Produce, has become my go-to stop for affordable organic produce. Rita’s family’s saying is “Eat good, be good” – I couldn’t agree more and that’s why I’m making a huge effort in 2018 to buy more organic.

Much of what I’m finding myself picking up from Rita’s Farm Produce isn’t intended for a specific recipe or meal – it just looks so good I can’t resist. You could call it impulse veggie buying. Last week’s impulse picks included Chinese cucumbers, also known as Suyu Long Cucumbers. They’re crispy and sweet to taste, but not that watery. 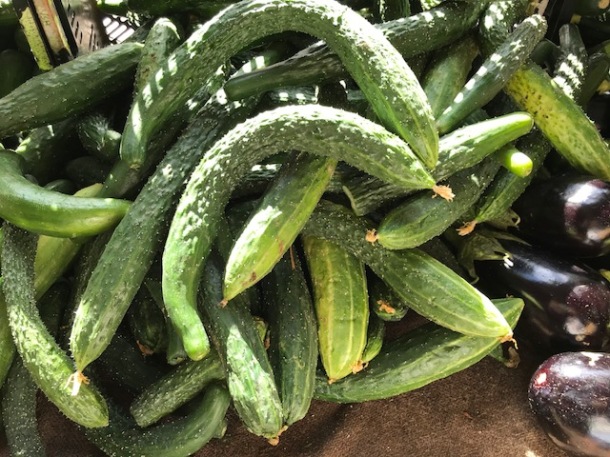 My husband pickled the Chinese cucumbers alongside the top of a bunch of organic celery. (Using the top of celery stalks and the leaves that too often get discarded is apparently now on trend with the rise of ‘root to stem’ cooking). 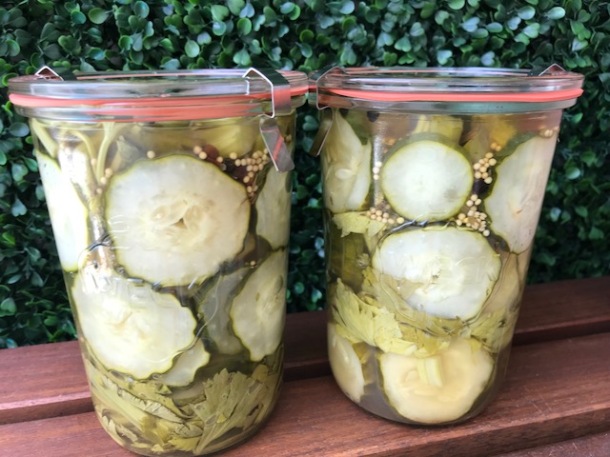 Pickled Cucumbers (or other veggies)

The spice mix for the pickling brine came from a recipe for pickled carrots and cauliflower from the cookbook Slow Food by Jared Ingersoll. Jared, originally from New Zealand, is one of Sydney’s well known chefs and his philosophy is to put produce first and let the seasons dictate what goes on your plate – this recipe is a great example of making using of seasonal produce. 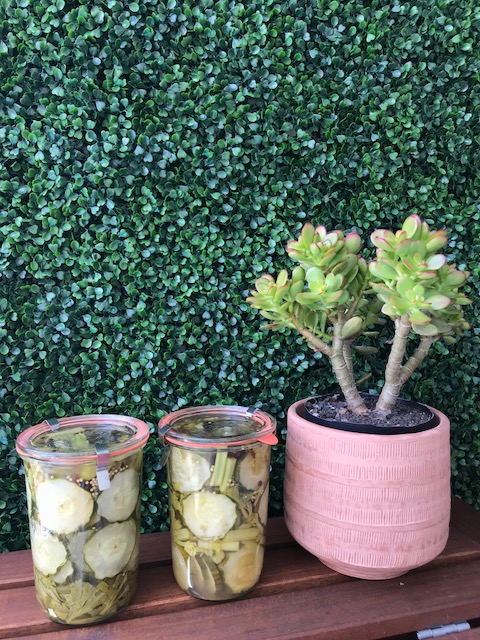 I mentioned earlier the saying the best things come to those who wait. It’s a saying that applies nicely to pickling because you do need to be patient and letting the spices work their magic over a few days before you dive in.